The founders of Split Rail knew that they wanted to create a business with strong social responsibility and environmental values that contributed to the local economy.

“Having a third-party provide support can really assist in moving sustainability projects along. Green Economy North keeps us accountable and helps us work towards achieving our sustainability goals.” 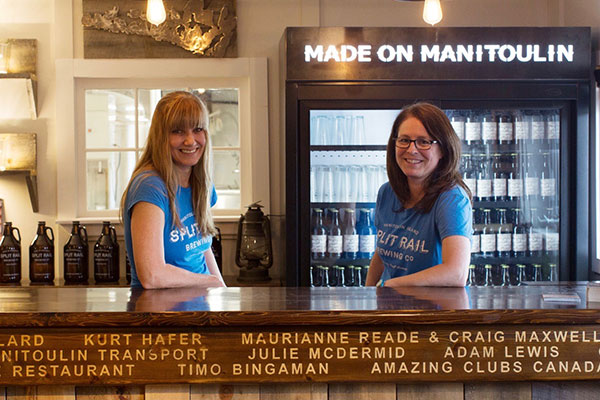 Split Rail Brewing Co. is Manitoulin Island’s first craft brewery, founded by Andrea Smith and Eleanor Charlton in 2012. They were inspired to start Split Rail because at the time, there were no breweries in Northern Ontario, and local establishments had expressed a strong desire for a local product. Split Rail launched to the public in 2015 with a selection of 100% Manitoulin Island-brewed and packaged craft beers. More recently, they have expanded their product line further, experimenting with craft sodas made exclusively from maple syrup from the Island.

Andrea and Eleanor knew when they started Split Rail that they wanted to create a business with strong social responsibility and environmental values that contributed to the local economy.

However, as many small business owners can relate to, running a small business can be both exciting and overwhelming. Even for those that know they want to make sustainability a priority, it can be hard to find the time to figure out what projects to tackle or to move them forward.

After being introduced to Green Economy North – Northern Ontario’s Green Economy Hub – Andrea and Eleanor realized that joining a Hub would be an ideal way to get the support needed to ensure Split Rail continued to make sustainability improvements.

When a new incentive program for small and medium-sized businesses to take on new sustainability projects was launched in 2019 as part of the Government of Canada’s Climate Action Incentive Fund, Green Economy North flagged for Andrea and Eleanor that this was an opportunity they could take advantage of.

Split Rail currently has a bottling line, but one tank of beer takes several days to bottle, and recycling glass takes more energy than aluminum, and so, a more environmentally friendly canning line, had been on Andrea and Eleanor’s wishlist for some time. A new canning line would be able to can a tank in one day, using less energy, and would also eliminate the transportation costs associated with bringing in a mobile canning line from Toronto, nearly 600 kilometres away — currently the only canning option for Split Rail.

Andrea and Eleanor knew they wanted to invest in building the canning line in the coming years once they had enough capital for the project, but Green Economy North helped them realize that the new canning line would be a fit with the incentive program — which could provide funding to offset up to 25% of the cost — and also helped them with the application process.

Now the new canning line could be up and running sooner than Andrea and Elanor could have hoped, leading to both cost savings and a more sustainable product.