As an organization with a mandate to connect people, plants, and place to serve our planet, RBG has long held environmental stewardship at the core of its strategic priorities. 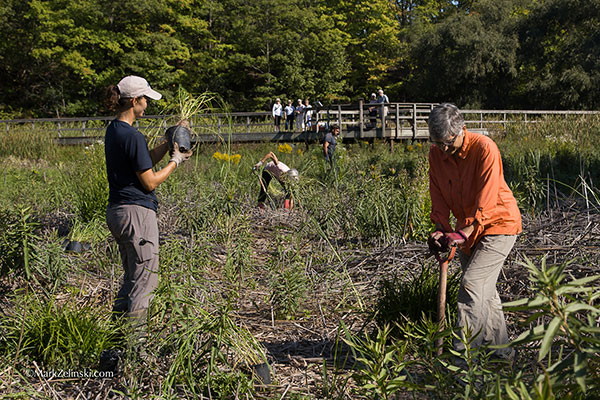 As an organization with a mandate to connect people, plants, and place to serve our planet, RBG has long held environmental stewardship at the core of its strategic priorities. More recently in 2014, RBG made a decision to take that a step further, embedding environmental leadership and sustainability into its five-year strategic plan.

The need for RBG to take a leadership role on climate action became all the more clear following extreme weather events in the spring of 2017. Historic levels of rainfall led to significant flooding and resulted in drowned young marsh plantings, shorelines littered with sewage and garbage washed in from overburdened storm sewers, and the forced closure of some RBG facilities due to flooded roads and trails. Staff even had to boat to work at the Cootes Paradise Fishway, a carp barrier that was almost under water itself.

In 2019, Lake Ontario water levels hit the highest point in recorded history at 76.03 metres above sea level, topping the previous record of 75.93 metres set in 2017. Flooding once again affected RBG, requiring the closure of several parking lots and trails, and annual repair costs that won’t be going away any time soon.

Over the last five years, Barb McKean, Head of Education, and Chris McAnally, Environmental Sustainability Coordinator, have been leading the efforts to bring the sustainability commitment outlined in RBG’s strategic plan to fruition. They have led the implementation of a wide variety of sustainability projects including LED lighting retrofits completed across multiple facilities, new EV charging stations, and upgrades to the HVAC system at their headquarters. Most recently, their three-acre Rose Garden was completely redesigned with more resilient roses combined with companion plants that support beneficial insects, and a drip irrigation system to decrease water consumption – a rose garden for the 21st century.

RBG has developed a Climate Change Resiliency Plan based on localized climate change model data. Recognizing that climate change is here to stay, RBG is focusing on actions to reduce their greenhouse gas emissions to slow down the worst impacts, while also making operational changes to adapt to the realities of a warmer planet and the more intense weather that brings. And they’re educating people about actions we can take, even by something as simple as changing the way we all garden.

“Our lives, our health and the global economy depend on plants,” says McKean. “We see that natural communities and our municipalities are both challenged by the impacts of climate change, and we want to engage others in taking action with us. As a business, we need to increase our resiliency and find ways we can adapt our operations to mitigate risk; this plan has helped all departments come together around taking action on these issues.”

She feels that climate action should not just be expected of businesses, but that businesses should be at the forefront. There is no doubt that in the absence of significant action, the costs of climate change will impact everyone’s bottom line; indeed, it is already happening.